(November 19, 2010)
Every year, Kladblog organizes in december a "Sinterklaas"-swap!
This year, M-tje didn't feel like participating,
but I thought it would be fun to be part of this swap!
So I signed up and today my Sintswap arrived!!!
Sinterklaas is a traditional Winter holiday figure in Dutch-speaking Europe (Netherlands and Flanders; today also known in territories of the former Dutch Empire, including South Africa, Aruba, Suriname, Curaçao, Bonaire, and Indonesia); he is celebrated annually on Saint Nicholas' eve (5 December) or, in Belgium, on the morning of 6 December. Originally, the feast celebrates the name day of Saint Nicholas, patron saint of children, sailors, and the city of Amsterdam, among others. Since celebrating saints' feast days is an uncommon phenomenon in the traditionally Protestant Netherlands, the Dutch celebrate at the 5th of December his reputed birthday. Sinterklaas is the basis of the holiday figure of Santa Claus in North America.
(Wikipedia)
André went to the door because we heard the postman ring twice...
euh........ no, that's something else I believe

The postman tried to push something in the mailbox,
but he made so much noise, André (M-tje's husband) went to the door!
The postman gave André a package and he almost gave it back to the postman,
because on the package it said E. Beer.....
and André didn't immediately know that was me 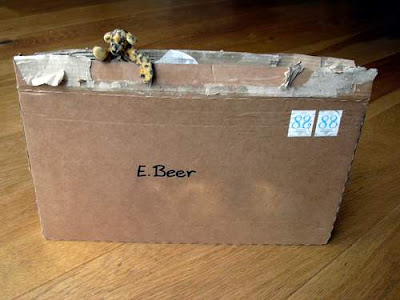 Thankfully I shouted just in time that it was meant for me!!!

I was sooooo curious....I ripped open the package and there were presents inside!!
But then M-tje came.....

You naughty bear....the swap musn't be opened yet!
You have to wait until december the 3th,
when all the swapmembers open the gifts together on the "Sint"-chat!
I did so every year, so you can do that too!
Oops...she was really angry with me

She startled me so, I accidentally fell in to the box! 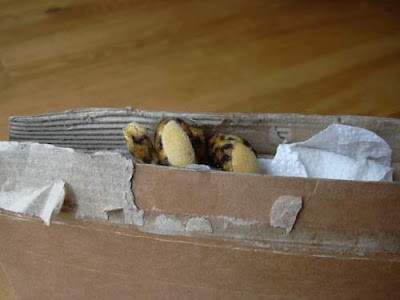 M-tje!!!
There are presents in the box!!!
You come here naughty bear....let me see!
Well....because they are still wrapped...you can take them out!
You've seen them already! 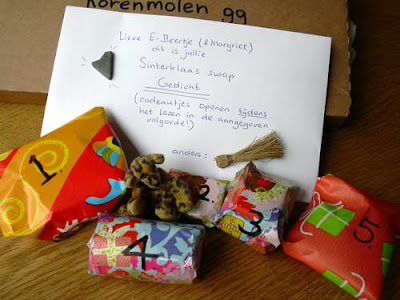 Wowwwwwwwwwwww, 5 presents and a "Sinterklaas"-poem!!!
I think this "Sinterklaas" knows me very good....
he even glued a heart-stone on the envelope! NICE!!!!
Oops...and a "roe"
(a chimney sweep's broom made of willow branches, used to spank naughty children)
maybe I should wait with opening the presents 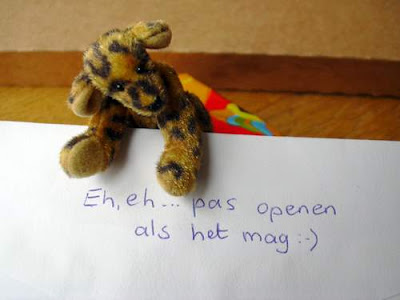 It says on the envelope " eh, eh....only open when it is allowed!"
Shame on you E-beertje....
give me the presents and then I will hide them!!!
You will get them back on the 3th of december!

I know what I will be doing the next few days when M-tje isn't around....
I will look everywhere for those presents