(March 28, 2009)
Maybe, just maybe...I never grew up ;-)
And actually I like it that way!!!
But sometimes, even I begin to doubt myself!
I have here a little bear sitting before me and now and them I just can't help myself and I start playing with him...just look and read!

A while ago, E-beertje was reading with me when I was chatting to some friends on Kladblog.
We had a lot of fun, but the little bear was so tired after a while!
Maybe the pina-colada he drank was one of the reasons, I'm not quite sure.

But luckily, I had just the place for him. The wizards who live in my tudor house hadn't arrived yet, so I put E-beertje in their bed! He could take a nap safely there...or so I thought! 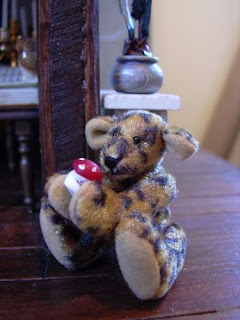 But I should have known!!! In a wizard's home, there are lots of things that are very dangerous for a little sweet bear!!! Thank God I was just in time and took the poisonous mushroom from his paws!
But did I really get there in time... 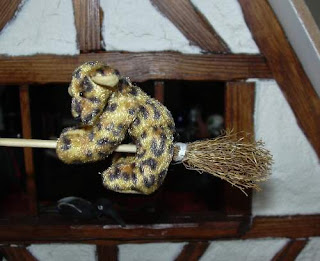 O noooooooooo....
That's too dangerous E-beertje!
(He fell off for at least 10 times!)
I have to be much more careful with this bear, because this is what big Edward mailed me!
"aaaah, that's why I felt so strange in my tummy tonight!
What are you doing with little E.?
It's becoming almost a comicbook hahahaha"
And I don't want anything bad to happen to big Edward of course!
E-beertje almost looks like a voodoo-doll.
But I don't think both E.'s will object to this...do you??? 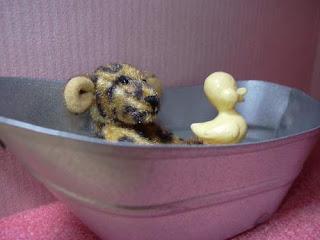 With love,
Margriet
Posted by Margriet at 5:16 PM