A new house...yes, another one!

While I was on holiday at my beach cabin...

(for which I received a lovely rug made by M-tje) 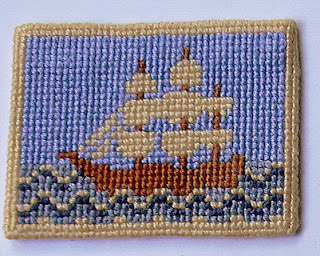 ......I thought long and hard about my future as a witchy bear!
All that magic stuff is fun,
but I had no idea I had to study so much to become a witch!!!
I thought waving my wand would be enough,
but no....
after hours and hours of studying
I still couldn't change a frog into a sexy prince

so I asked Dalia if she wanted to move into the tree house!
I will still come to visit
and help M-tje building the furniture
(I'm a very good carpenter!)
And I still want to learn how to fly on a broomstick!!!
Dalia thought it was a wonderful idea

(maybe she wasn't to impressed with my magical talents)
When M-tje got home from France
I told her the news!
And I immediately told her to build me a new house...
well, as a spoiled little bear
I need something new every now and then!
M-tje had a wonderful idea she said!!!
First she made a cardboard example...... 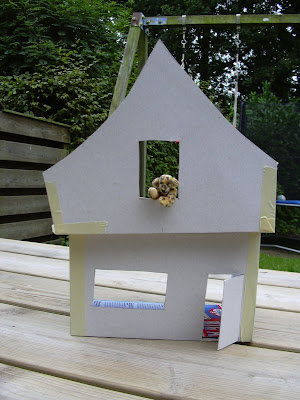 Euh M-tje...
did you make a mistake with the measuring???
But no, M-tje said it was just right...
this little house is based on the
crooked house of Rik Pierce.
M-tje loves his houses and in particulary this house,
that must have suffered from subsidence.....
or the carpenter was drunk

The house is build with builders foam ,
easy to cut and very light!
M-tje is going to work on this house
at the dolls house club meetings,
so it won't go very fast,
but thankfully I have more places where I can sleep! 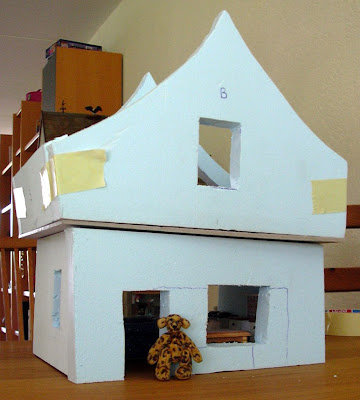 M-tje had some half scale furniture in storage,
which she made some time ago
and I snatched them all

I already placed them in the house,
just to get an idea where everything will go! 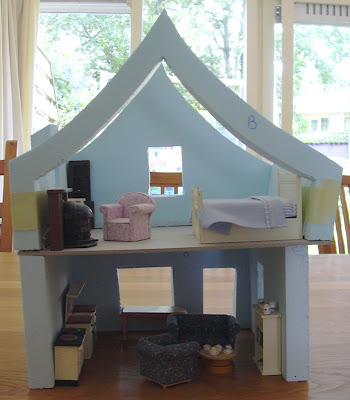 Hmm.....playing with marbles in this house
is probably not the best idea,
but I'm sure it will be a very cozy house!!! 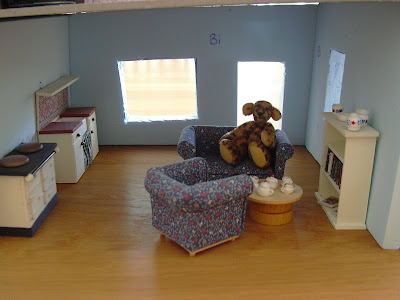 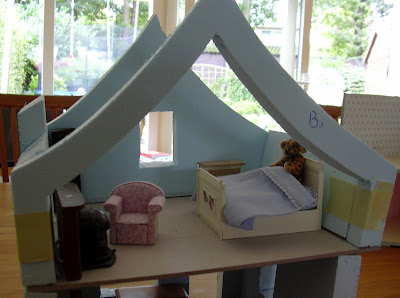 And today M-tje gave me a little gift for my new house... 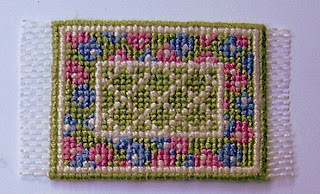 The rugs are wonderful. I like your new project and I'm curious to see more.
Bye Faby

We're kind of sorry to hear you gave up on becoming a witchy bear... that would have been a lot of fun - but we can truly understand your reasons, and maybe it's even more fun watching you doing what you can do better than anyone else: Helping M-tje to build a new house. What a great idea, it looks so good so far. Please tell us more soon!

Hugs
Flutterby + Birgit (who are glad to have you back with a new post - FINALLY!)

I LOVE Rick Pierce's Houses!!! This new project looks really fun! (I must confess I have been thinking of building a similar one with builders foam.... but must make myself finish my Tiny project first!!!) I Look forward to seeing your progress!