Adventure in the snow

Almost a year ago, just before Christmas, we had a lot of snow in the north of the Netherlands (where E-beertje and I live!) In 24 hours there fell 50 cm of snow (20 inches)!!!
(December 18, 2009)
yesterday, E-beertje stayed inside all day..
watching the snow fall all day and watching the children play!!!
he never had seen something so beautiful, but at the same time it was a bit scary also, all those big snowflakes looked very, very big for a little bear like himself 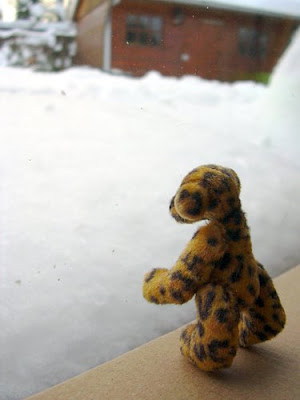 But today, his curiousity won!!

The sun was shining and it wasn't snowing as much as yesterday!
He wanted to go outside!
If I went with him, he wouldn't be afraid, he said!
And well...who can say no to such a sweet bear...I know I can't!!!
First he wanted to go for a sleigh ride!!! 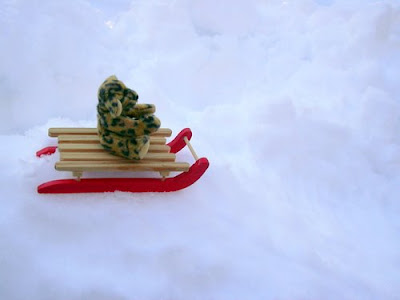 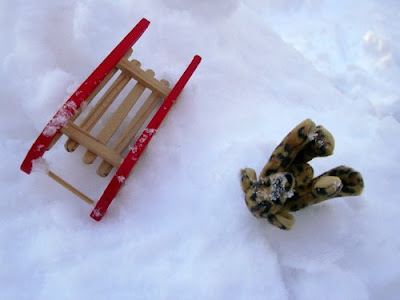 Poor bear...luckily he fell soft!!
But the snow was very cold!!!

Let's think about something else to do....
A snowball fight???
Yesssssssssss...that will be fun! 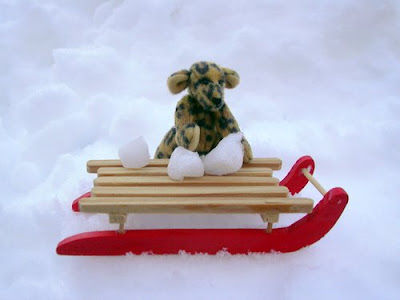 After a few misses, I threw a snowball back to E-beertje!
But...euh....I forgot he's just a miniature bear!
I still hear him screaming..."M-tje, nooooooooooooooooo!!!!" 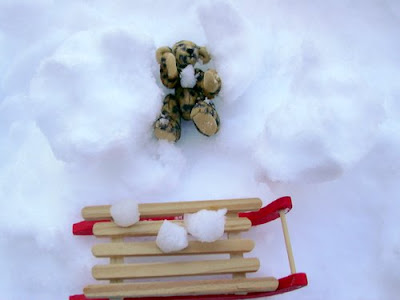 My snwoball was a bit too big, I'm so sorry E-beertje
What can we do that is a bit safer for you little one??
We could make a snowman, euh...snowbear??? 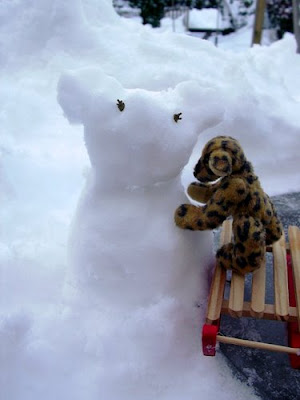 And skating a few rounds on a private ice rink!!
E-beertje is using a chair for balance, but it is his first time skating!!
LO-bear (Little Orange bear) joined him for the skating, that was fun!!! 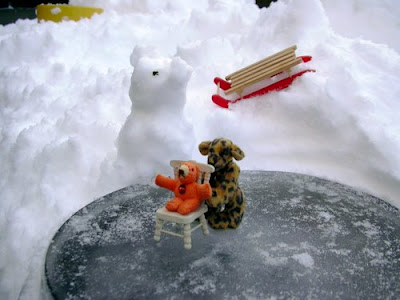 But after all the fun, E-beertje was very cold!
So I took him inside,
put a blanket around him,
put his chair with the fire and ther he's sitting now,
nice and cozy and getting warm again! 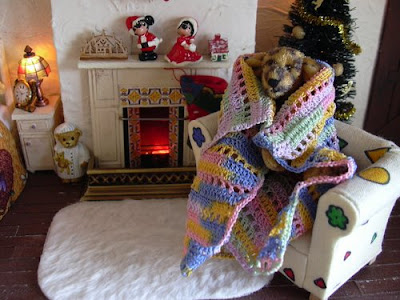 I think I will bring him a nice cup of hot chocolate!!
Posted by Margriet at 5:29 PM

A lovely story and beautiful pictures. I love the last photo, the bear deserves to be in this blanket after all he did in the snow.
Geneviève

Awwwwww, Oh my gosh what a cute little story and the pictures are adorable. Hahaha, I love the ice skating picture with E-beertje using the chair to help him balance. And he looks so cute and cozy in the last picture next to the fire wrapped up in his soft blankie!

Thank you for this absolutely lovely story and the beautiful pictures. I really hope you did bring E-beertje a cup of hot chocolate, he really deserved it.

Have a nice weekend!
Birgit